This probably tops my list of cute things that I really like, but will probably never actually make. 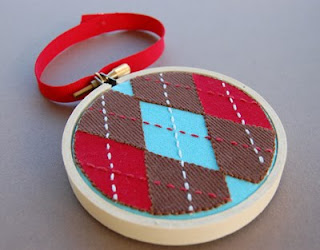 Though, you never know. It could happen. Maybe you could make one though. And then you'd have a nice Christmas gift for me... or someone else, I suppose.

It's very similar to this idea which the crafty internets were all over in August: 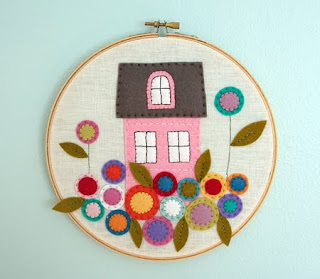 While I also think this is incredibly cute, it is probably less likely that I would make this because I don't know where I would put it. Maybe in Z's room. Maybe I would give it as a gift. I guess it might make a nice housewarming gift, hmm?
crafty goodness shared by Teddi Taylor at 7:57 PM

Email ThisBlogThis!Share to TwitterShare to FacebookShare to Pinterest
Labels: appliques, Christmas ornament, embroidery, things I like but won't make

so, so cute! and I'm right there with you: would love to but when?

If you did it not in an embroidery hoop you could stuff it and hang it on a christmas tree. Or you could applique it onto a simple tea towel. That'd be cute.

I'd put in on a felted purse. Maybe I'll do that - I just felted a couple of sweaters and was looking for an idea to "cute it up". Thanks for the idea!