This is a re-post from my personal blog, Containers and Compartments. This was for my son, S's second birthday. Instead of making a cake, I made a bunch of hamburgers and french fries, since he's such a fast food loving kid (not really). I got the idea from this post from Bakerella. 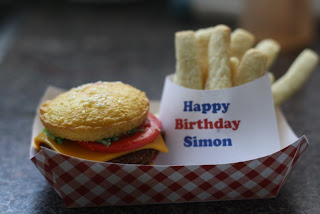 Okay, so we didn't forgo cake altogether! It's a brownie cupcake hamburger and sugar cookie french fries! So fun and so tasty (though I found the hamburger to be a little too sweet for my taste). 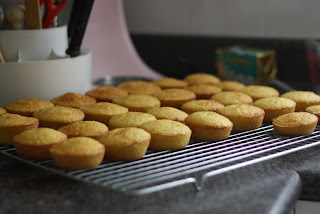 Duncan Hines yellow cake cupcakes, made a little on the short side. I got 35 cupcakes out of one mix. 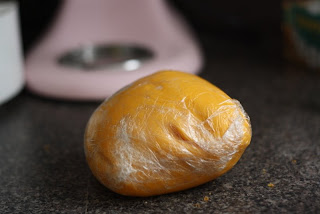 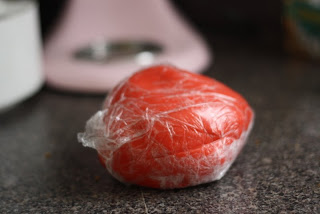 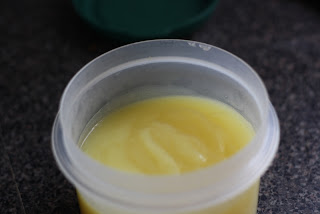 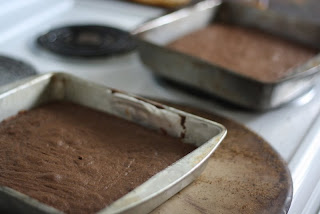 Brownies.... for the hamburger patties. To stretch my batter a bit, I added 1/2 cup of homemade applesauce instead of increasing the butter, and increased the dry ingredients by 1/3 except the sugar (I figured 3 cups was quite enough). Instead of cracking and falling like they usually do, they were even and fluffy, a little more cake-y, but tasty and beautiful looking. 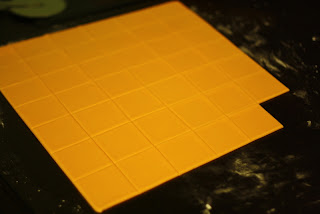 The "cheese" rolled out and cut for hamburgers. I used a ruler (to make them square) and a pizza cutter and did my best to cut in straight lines. But it didn't matter that much. 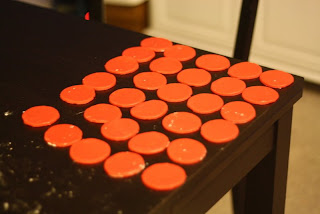 The "tomatoes" rolled and cut. I used a biscuit cutter for these and the brownie "hamburgers." 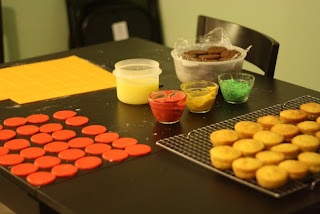 All the ingredients ready for assembly. The bowl is full of the brownies. I squished each one of them before assembling. They were too tall otherwise. The squishing made them a little less perfectly round, which added to the authentic look. 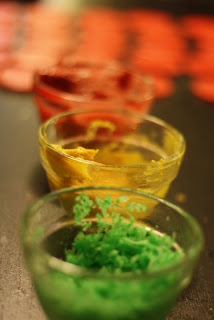 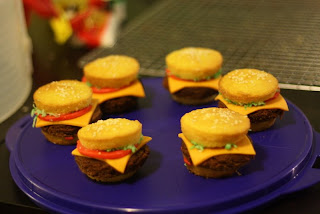 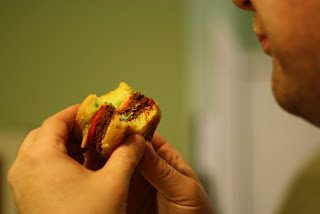 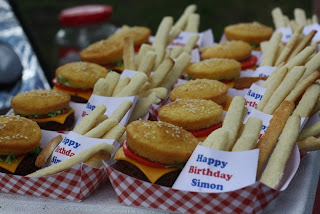 Hamburgers and fries assembled for our friends at the Legislature Grounds. 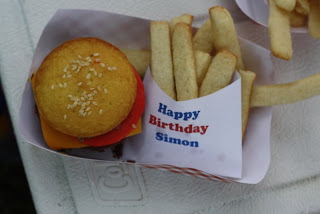 I made this: Robot

I borrowed this book by Christen Haden of Needle Noodles from the library last week. It's not new on the market, but its copyright is just last year, so that's not so bad, right? I really enjoyed the book. After listening to a podcast about traditional book publishing and e-book publishing, I feel a little guilty borrowing it from the library instead of buying it. Oh well. Maybe I will still buy it. The first thing I remember seeing from Christen was a pattern for a cute Santa, Mrs Claus, Elf and Snowman set (the pattern seems to be missing from her etsy shop right now), which inspired the nativity creatures I created last Christmas for the children. 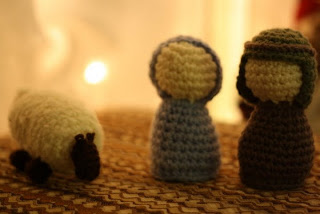 I made a donkey and Jesus, too, but they were galavanting somewhere around the house at the time of this picture (49"Why were you searching for me?" he asked. "Didn't you know I had to be in my Father's house?" Luke 2:49)

I made this cute robot from the Creepy Cute Crochet. 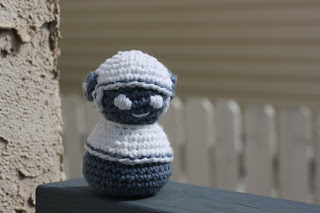 The kids like him too, but he mostly just gets thrown around like a ball. Just what I was going for.
crafty goodness shared by Teddi Taylor at 3:14 PM No comments:

Email ThisBlogThis!Share to TwitterShare to FacebookShare to Pinterest
Labels: amigurumi, crochet, crochet stuffies, I made this 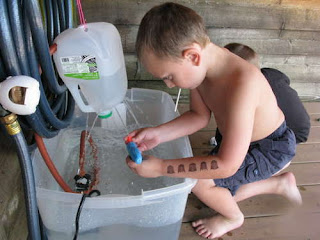 Ok. This is so sweet. I would totally do this. Especially if I had a fountain pump and 1/2 inch hose just hanging around in my garage (and if I had a garage). Instructables rocks.
crafty goodness shared by Teddi Taylor at 10:05 PM No comments:

Email ThisBlogThis!Share to TwitterShare to FacebookShare to Pinterest
Labels: FOUND, i love this

Hey, see? I'm getting back on this blog bandwagon and am looking forward to getting better (and faster, because faster means I'm more likely to do it more frequently if I don't have to take a long time to do one post).

The point of craftevangelist is that I get to share the cool crafty things that I've found with you. And I like to do that. Today I found a bunch of cool handwritten fonts you can download for free from Tripwire Magazine! I love these kind of things. (via CRAFT)

A few of my favorites. I haven't even finished looking through them all! My first thought was to download them for fun and projects at home, but the more I think of it I can use them for some of my design projects at work, too!

crafty goodness shared by Teddi Taylor at 9:28 AM No comments:

Dust off the blog and I made this: purse

Ok, so I've really done a crap job of this craft blog lately. Ok, I've never done a good job of this craft blog. But for the amount of crafting I do, I really have a lot to put here. Because I've never done much of an introduction for this blog, I thought I'd give you my thoughts about it. I wanted a place that was different from my personal blog where I could send people who were interested in the crafty me. My personal blog turned pretty crafty for a while, which was fine, but many people who don't know the real me don't necessarily care to hear about my conversation with my three year old on the bus or why I choose to cloth diaper. I've never been much of a poop-talk, mommy, but still.

As you will learn, I don't spend a lot of time apologizing for things I haven't done, like not blogging. So now that I'm here, let me share something with you. This bag has been a long time in the making. I have a purse. Just a small, regular, going out purse. But I needed a hand bag. A transition diaper bag/mommy purse/shopping bag. I don't always need a full diaper bag... one diaper when we're out is usually more than enough. So if I have one in my bag with a wipe or two, that's usually sufficient. But I always need room for a couple pairs of socks (in case we're at a play place) and I like to have pockets for all my things... wallet, cell phone, iPod, sunglasses, keys, change purse, you know.

And for entirely too long, I was hauling around a reuseable shopping bag (not a cool one) with my purse in it and all the other crap I wanted to carry. Finally, my coworker, who brought her sons to my son's birthday party, gave S his birthday gift, it came in a cute reusable bag that I commandeered and carried that around. It was a big step up from the one I was using.

All this time I was dreaming of and looking for the perfect fabric for my handbag. I have a small stash of fabric. So I couldn't just go to my stash. After nearly 9 months, I acquired all the fabric I needed for my handbag. And a couple months later, in less than 2 days (mommy days... naps & evenings) I designed and put together the new handbag. And I'm SOOO pleased with it! 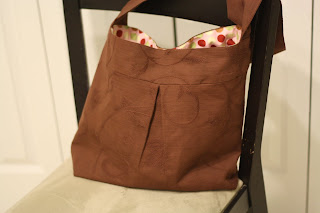 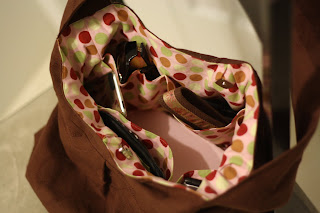 Isn't that a fun lining fabric? I bought it for aprons that I made for me and Z... (I changed the style of apron I was planning to make so that I would have extra leftover to line a handbag!) 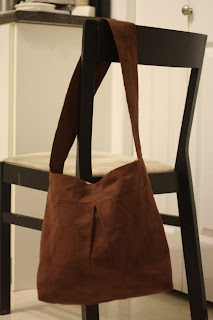 Not too bad for a first time, eh?
crafty goodness shared by Teddi Taylor at 9:59 PM No comments:

Email ThisBlogThis!Share to TwitterShare to FacebookShare to Pinterest
Labels: handbag, I made this, purse
Newer Posts Older Posts Home
Subscribe to: Posts (Atom)