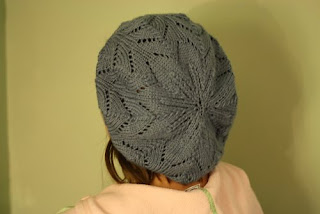 This is a beret I made at the end of last year/beginning of this year. It was my Christmas break project. The lace pattern was a little bit addictive, so it only took me about 3 days. Of course, I have children and a husband and all that, so it wasn't really 3 days, but I do remember putting in a little more than just evenings. It was a mystery knit along pattern called "Meret" found on Ravelry. I didn't knit along, because the knit along was finished by the time I found the pattern. 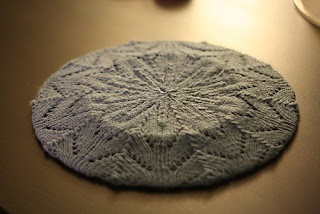 Here it is being blocked. That's a charger plate it's being blocked on! I was a little worried this would stretch it out too much, but it's bounced back a little bit since and looks quite good. If you could see the other side of the charger plate, you would see that the brim of the hat comes almost to the middle of the plate, so blocking it on the charger plate did not stretch out the brim which is really important. I made 2 extra lace pattern repeats since I wanted a slouchy beret and I had read quite a few reviews that recommended doing 2 extra repeats before finishing off.

This is a great pattern for introducing lace knitting, since it's a pretty easily memorized pattern and fairly easy to see where you are in the pattern. It became quite addictive. I recommend it!
crafty goodness shared by Teddi Taylor at 12:24 PM

Email ThisBlogThis!Share to TwitterShare to FacebookShare to Pinterest
Labels: FOUND, free pattern, hats, I made this, knitting