I made a couple things for my daughter's Halloween costume this year. Only one of them was made specifically for Halloween and that's this lovely tutu. 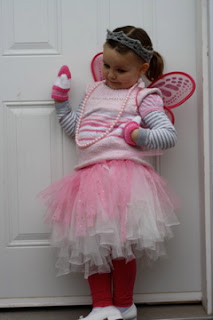 Such a sassy little pose.

I made it using this tutorial from Grosgrain. It required almost no sewing. I made it using an Ikea Lill Curtains. The beauty of these curtains is that there is 5 square metres of fabric for only $7! Super sweet deal. I even left the little hem on the bottom since I thought it gave an interesting look to it. You'll notice that Z is indeed dressed for a Canadian Halloween, wearing multiple layers and warmness. It is definitely difficult to do cute girly costumes that are warm enough to wear outside. We had a relatively mild Halloween again this year, but you just never know what the weather is going to be like when you're planning. And now with class dress up parties, you almost need 2 separate costumes: one for wearing to school and one for going out in. 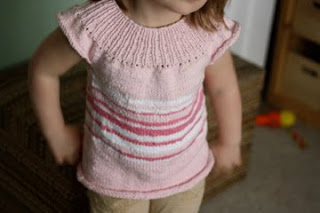 So, the one of the other things I made was the sweater (though not originally intending it for a costume), made from this pattern. I am kicking myself now for not printing this pattern out when I made it for my daughter (I'd just refer to the pattern on the computer). It was free then. It wasn't in Z's size, so I did have to re-size it which, now that she is selling it, the pattern creator has done. I'm pretty sure I could figure out what I did from examining the garment and from memory.

The striping was created from this random stripe generator which is SOOO sweet. The geek in me is kind of excited by the math and programming involved in this. I don't indulge my inner math/programming geek much, instead I just enjoy this little tool and play with all the different possibilities. 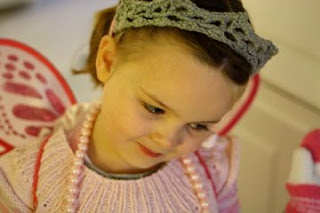 The last thing I made was this crown, made from this pattern by Midknight Knitter. I made it with a slight variation, sewing elastic in at the back and crocheting over it, so it would fit a bit better. I had also made this earlier, after one too many cheap plastic crowns broke from being stepped on or otherwise misused. I decided a crocheted crown would solve the broken crown problem, and it has. I made this one in January and it has lasted us until now, it pretty good condition, other than some stretching in the elastic.

Email ThisBlogThis!Share to TwitterShare to FacebookShare to Pinterest
Labels: crochet, free pattern, Halloween, I made this, knitting, simple halloween costume