Well, this is over a month belated, but once it got near Halloween, I thought I would save this to share in time for American Thanksgiving. If you read as many craft blogs as I do, you can't help but being reminded once Halloween is over, that Thanksgiving is on its way. I'm still not sure I fully appreciate the magnitude of the American Thanksgiving holiday, except that someone told me it's almost bigger than Christmas. That's helpful, I guess. 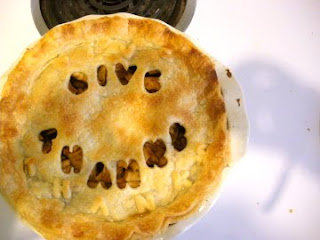 Can you see the shadow of my hands in the photo?

I took this picture with no flash on my point & shoot.

Here is the pie I made this Thanksgiving. I was happy with the crust. It worked this time. The first time I made pie crust on my own, I didn't have a pastry blender and I didn't cut the lard pieces small enough since I had read a tip that it was good not to make them too small. I guess I didn't go quite small enough because when I rolled it out, I could see pieces of lard that then stuck to my rolling pin and... well, it wasn't pretty. 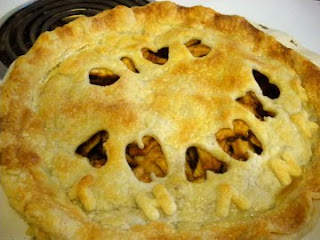 I did a little bit of playing in iPhoto with these pictures, to warm them up a bit.

They had a bit of a greeny tinge, which isn't so nice when you're thinking pie.

After yesterday's light post, you'll probably notice that something is a little off about these pictures. Our good camera was in the shop over Thanksgiving. It gave out on us during what was supposed to be a lovely little fall photo shoot at Prairie Gardens & Greenhouses. Fortunately it was still under warranty, and while the guy at McBain said it would take 6 - 12 weeks to get back (I was freaking out: that meant it could get back after Christmas). Happily, they under-promised and over-delivered and it ended up only taking 4 weeks and I had it back in time for Halloween. The point and shoot we have has a "food" setting, which I used for these pictures. Maybe it helped. I don't know. 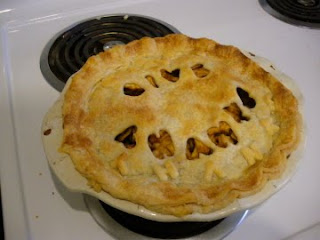 We have some plastic letter stamps which I usually just let the kids use with the playdough, but they're the closest thing I have to alphabet cutters. I had to be extra careful since they are stamps and not cutters, so I had to gently dig the cut out letter from the inside of the stamp after I cut it in order to use them on the top. You have to look carefully to see the raised word "GIVE" above the cut out word, but it's there.