So my son had a birthday... nearly a month ago. And now y'all get to hear about it. Hopefully you're one of the lucky ones and saw this on Facebook... or not and you don't really care if you see my son's spectacular birthday cupcakes in a timely matter. Either way, you get what you get. But without any further ado... 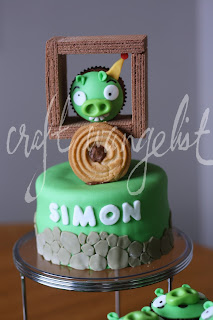 Now I can't remember if I shared last year's birthday cake, but the theme last year was Angry Birds. Here is a look at last year's cake in case I didn't post it. 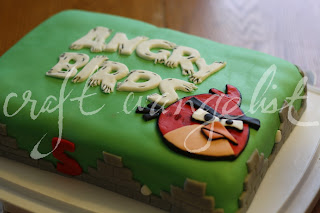 We have graduated this year to Bad Piggies. Something of an obsession, I guess. He really doesn't play that much of either, but he likes the characters enough, I suppose. Bad Piggies was an incredibly fun birthday theme. You get to build these wonderful vehicle contraptions to complete the brief obstacle course. And there are all these crazy piggies. 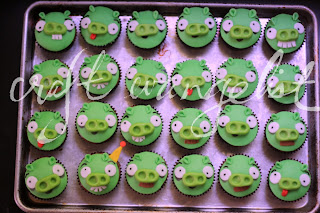 For the game, we picked up a bunch of red helium balloons and some dollar store paper treat boxes. We put a Bad Piggy (from our Angry Birds set) inside the box, tied a couple balloons to the box and swatted it around the main floor. When they got to the end, the kids got a yellow card-stock card filled with candy & a balloon. 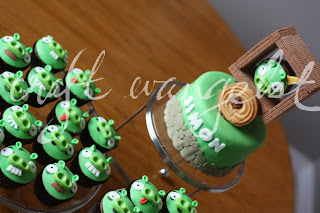 I was up very late the night before his party making the piggies, which were lots of fun to make. When my husband got home from being out (pretty late himself), he said, "You're still up???" to which I replied, "Don't tell me what time it is. I don't know and I feel fine and I still have more work to do." It was past 3 AM before I got to bed. Unfortunately I was a little on the grumpy side for the party, but thankfully the kids didn't require a lot of my attention. The whole thing made me want to re-think the way we do birthday parties, though.

But not the cake.
crafty goodness shared by Teddi Taylor at 8:00 AM