This is another one of my mom's recipes. Apparently it was my older sister's first solid food, which I love because for one, it's a casserole which automatically means it contains a many ingredients and these days with all the concern over allergies and everything, there's no way most moms would give this as their baby's first solid food. And it's full of potential allergens: fish, wheat, milk, cheese, and whatever's in condensed mushroom soup. By the way, my sister is not allergic to any of these things (or much else, for that matter).

Here is my mom's recipe. I made the following changes: I used butter for margarine, canned turkey (please don't do this: use some cooked diced chicken or something better; I was being cheap and lazy. Canned turkey is gross. If you don't believe me, buy some and try it) instead of canned tuna (husband won't eat tuna), brown rice rotini pasta for macaroni, and some Alymer's Accents tomatoes with spicy red peppers instead of regular tomatoes. I also threw some cottage cheese in there to use up the rest of it. I also omitted the salt since the turkey was pretty salty (eeewww...) 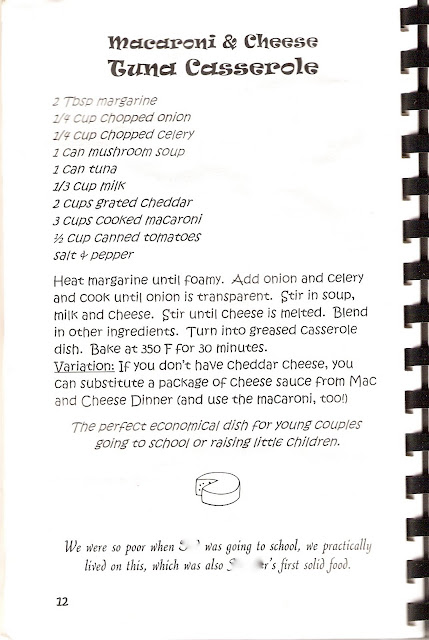 My kids don't really like this, but I will make a salad or some crudite and serve it with some rolls. I like to give them things they don't like so they get exposed to new foods and who knows? They might be hungry enough to try it one day and maybe they'll like it. I probably shouldn't try very hard with this recipe since it isn't the healthiest I've got.
crafty goodness shared by Teddi Taylor at 4:50 PM