Meal Plan: How We've Been Doing

As you can tell, this month has been all about the meal plan. Since I'm doing it anyway, I figure maybe you all can benefit from all my hard work and planning and get some inspiration.
June 2010 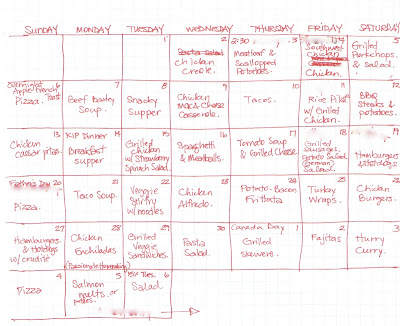 Here's how things have actually shaken down in the last week... Wednesday went as planned... yay successful day 1! But by Thursday, as you know, things got a little off course. I had forgotten about the family BBQ planned at my daughters school and even went as far as preparing the scallopped potatoes during quiet time so everything was all ready for dinner. When I remembered the BBQ, I figured I could leave everything in the fridge and pull it out for dinner the next night.
On Friday night, things did not go quite as smoothly, since we were at a birthday party that began at 3:30. I would have liked to put the meatloaf and scallopped potatoes in the oven at 4:00 for a 5:15 or so dinner. We were not home. Thankfully my wonderful husband thought to put them in when he got home (yay for blogging about dinner plans!) and we were able to eat by 6:30 instead of pulling out some kind of back up plan.
We also switched Saturday & Sunday's dinners around because we didn't have briquettes for our barbeque to grill the pork chops. We had yummy homemade pizza on Saturday, which I ended up taking down to the park where we listened to a friend's band play at a local festival. Husband bought briquettes on Sunday afternoon and we had delicious BBQ pork chops for dinner with a salad.
Beef Barley Soup went ahead as planned on Monday, but somehow I had forgotten to buy barley on shopping day (it was on my list; I checked), so husband picked some up along with some fresh Safeway crusty rolls on his way home for work. It added an extra 20 minutes to finishing the dish once he got home, but soups are so forgiving (it also gave me time to warm up the rolls in the oven... mmmmm....). It's a delicious soup recipe, make with ground beef instead of a more expensive cut of beef, which makes it a pretty cheap meal and very easy. I'll have to post the recipe before the month is out.
I opted to switch Tuesday night's "Snacky Supper" with next Thursday's "Grilled Cheese & Tomato Soup" since it has been chilly all week and I like to take advantage of the cooler days to eat warm food when I know it will be warming up later on in the month and they'll be plenty of opportunities to eat Snacky Supper.
Last night and tonight went according to plan, as well. So, all in all, we've done pretty well at sticking to our meal plan. This week is a pretty good example of how I am loosey goosey with meal planning. Some might call it flexible, relaxed. That sounds so much better. Once you have a plan and shop for it for the week, you can bump the meals around pretty easily if it ends up not working out so well for that particular day. It's so nice to have a plan and not be fretting about what to make for dinner at 4:00.
Happy meal planning!
crafty goodness shared by Teddi Taylor at 7:05 PM

Teddi, you have inspired me to make a meal plan, which I have been attempting to do for years. I made a spreadsheet Calendar til the end of 2010, but havent' quite completed my menus for June yet (but it's coming along).
I tried the theme days but it is difficult to stick to when you are working on what you have in the freezer now. It will be better after shopping around the meal plan. We'll see how it goes, but it definitely takes the stress out of "What am I gonna make for dinner?"
If you want a copy of my spreadsheet calendar, it makes it easy to use and I dont lose my paper.