I made this: Owl Toque

I made this toque (winter hat for non-Canadians) last winter from some leftover yarn I had. I was going to make S's knit pants with stripes along the side, but I made a pair like that and I wasn't especially happy with them and they took a LONG time to make and were generally frustrating. So, this was going to be the stripe colour. And now it's a hat. 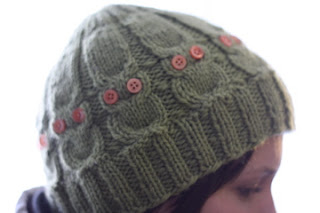 It took me a while to get those buttons. I had a hard time finding just what I wanted. You know when you get something in your head that has to be just right and you figure it's simple enough so it shouldn't be too difficult to find? That's what happened to those. I thought that orange irridescent buttons would be perfect, but they were not easy to come by. I eventually ordered them off Etsy for a pretty good price. Using the motif from this sweater, I figured out how many owls I would need to go around my head, made sure the stitches needed for that many owls was divisible by 4 (for 2x2 ribbing... I may have had to decrease a few stitches and increase after the ribbing) and cast on. It was actually a pretty easy pattern to create out of the sweater pattern. The ravelry pattern download is available here.

If I were to make it again, I think I would make a ribbing that would better suit the owls, so that the knit stitches matched up perfectly with the owls' feet. And I would do something different about the way I finished it because it has a pointy-ish top that I don't like so much. All in all, not so bad.
crafty goodness shared by Teddi Taylor at 3:23 PM