Last year, when it was my son's first birthday, I made him this cake. S has a stuffed Ty elephant that Z affectionately named "Lumpy" (after the Heffalump from Winnie the Pooh), so while I thought at first that I would model the cake after S's stuffed toy, it was infinitely easier to use the Heffalump from Winnie the Pooh. Here was my inspiration: 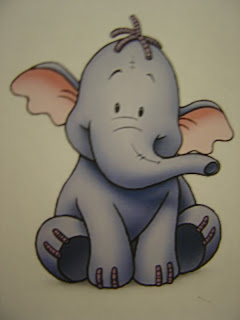 I printed this picture off the Internet and took a picture of it.

Then I traced the cake pan, and sketched the picture onto the paper. I had some help because I copied and pasted the picture from the Internet into my Paint program and drew a rectangle around the main part of the body, so I knew about how much to sketch onto the main part and how to make the leftovers work for the rest of the pieces. 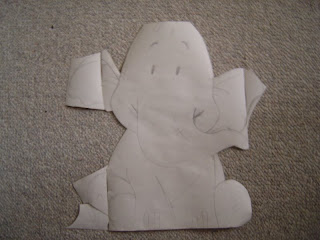 The taped-on pieces are "leftovers" from the rest of the shape being cut out. I placed this image on the cake and cut the cake around it.

I decided to use the rounded top of the cake (that I had cut off to level the cake) to shape a 3D nose for Lumpy because the cake just didn't seem challenging enough (ha ha ha). Here is a picture with all the pieces pasted together before icing. Just about every edge was raw (a cake decorator's nightmare). 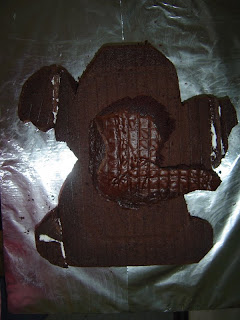 Then, I iced the cake. I used a buttercream icing flavoured with peppermint extract instead of vanilla (mint chocolate cake...mmmmm...) and coloured it light blue (like S's stuffie instead of light purple like the Heffalump). 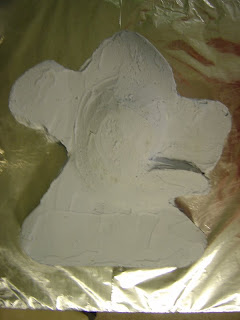 Not too bad. It's hard to get a smooth finish on a "Lumpy" surface (pun intended).


After putting the main coat of icing on, it was time for finishing. 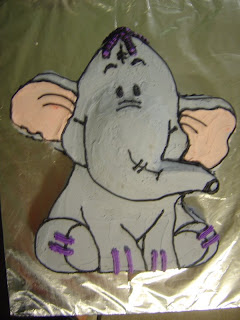 So, here he is all drawn on and outlined. 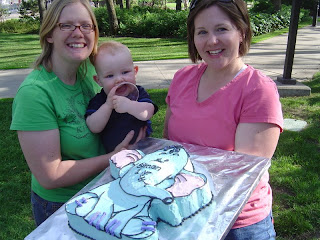 And here we are posing with the cake, before or after singing to S at the park.
That's my sister holding S.