Baking with Bokeh + a little rant 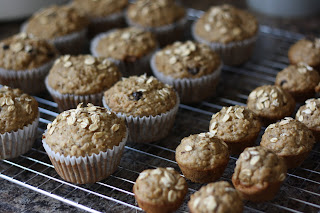 You know, all you need to do to make your baking look yummier is grab some natural light and a low F-stop and you get that nice blur in the background that means you can't tell when it was I last gave my counter tops a good scrub (usually daily, but you never know). These banana oatmeal muffins were pretty good, except the big ones stuck to the cupcake paper like nobody's business.

(Here begins the rant; if you're not one for rants, just skip this part, enjoy the picture. We ate muffins; have a nice day.)

I found the recipe on Allrecipes.com. By itself it would be a fine muffin recipe. I probably should have followed the recipe as written just to have actually made it. But I read the reviews. This is my biggest beef with Allrecipes.com and it really has little to do with the site itself, but much more to do with the users of the site and how they incorrectly use the star system and the reviews. Seriously, no matter how many stars the recipe has, you still need to read through at least 10 reviews to figure out whether you should even bother making the recipe or not and what changes you should make to the recipe should you decide to make it. I mean, it's one thing to make the recipe once, decide it needed a little more *whatever* and write a review saying as much and still rate it well. It's another thing to change 3-5 things about the recipe, declare it fabulous and give it 5 stars. It's like going to Home Depot, going through the self checkout, going home and doing the online survey and saying you got fabulous service at the checkout. "I rock at scanning things and swiping my debit card." I have occasionally seen comments by other users who get upset with previous reviewers who rate a recipe poorly based on the changes they made to the recipe. That makes sense, but it is equally unhelpful to have to read through countless reviews in order to determine what recipe is 4.5 stars. I don't know why someone just doesn't write up their own recipe with the changes they made and then everyone can rate that recipe with 5 stars as written.

This recipe for Banana Oat Muffins has the same issue, of course. These muffins were pretty good made with the changes that most people suggested. They weren't complicated changes, apple sauce for oil, brown sugar for white, add some chocolate chips, whatever. No big deal. I would probably make them again, but follow the recipe as written. 1/3 cup of oil isn't that bad for a batch of muffins and maybe then they wouldn't stick to the cupcake paper so badly.

So that's my rant. I don't know why I don't just use some other site, other than it's just as unpredictable if it's a good recipe or not. I implore you, Allrecipes users, write your own recipe or rate the recipe as written.
crafty goodness shared by Teddi Taylor at 9:30 AM