In March, we had a birthday. Two actually. Mine and my daughter's. Mine totally gets overshadowed by the child's. I am totally okay with this. I made cupcakes to send to school on her actual birthday. They were strawberry cupcakes made with this Martha Stewart recipe. Honestly, I've been a bit underwhelmed by Martha's cake recipes. I made a perfect white cake (or something like that) from her site, too. And it was kind of dry. I really like that the ingredients called for in both the cake and the icing were simple, real ingredients, so that's nice. No food coloring and no artificial flavours. 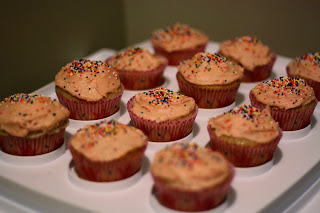 While I have a this great cupcake icing kit from Bake it Pretty, with a number of large, fancy tips, the recipe didn't make enough icing for me to frost them all cupcake-shop fancy. I still need to make some cupcakes with that kit. Personally, I prefer a lot less frosting on my cupcakes and I like the homemade look of just frosting them with a spatula and dipping them in sprinkles.

Last year, I made a 3 shirt for my son's birthday. My husband insisted I put the large 3 on the back of the shirt, since jerseys don't have the numbers on the front. Against my better judgment ("It's not a jersey..."), I complied and my son has insisted on wearing it backward from day one. Funny. 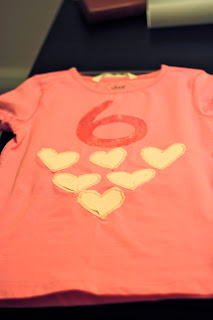 I made a six shirt for Zoe. Pink pink pink. She loves pink. That six is sparkly fabric paint. I used the freezer paper stencil technique to make the six. So easy peasy. I also recently discovered in a different t-shirt embellishment project that using freezer paper as a stabilizer for the jersey knit fabric is super helpful. I could draw on the paper side and then cut the paper and the fabric at the same time instead of fussing with slippery fabric. 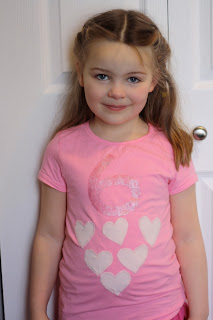 So, I sent my birthday girl to her favorite place in the world (school) with 30 cupcakes to share with her classmates and teachers with strict instructions not to return with any leftover cupcakes (remember how I lost 25 lbs this year?). She wasn't feeling great. I knew she wasn't feeling great, but she hadn't vomited and she wanted to go to school. On her birthday. She gets a birthday crown. She hadn't talked about anything else since January. This kid rarely gets sick. And when she does, she can time it to Thursdays (no school) and weekends. She just got her days off (her birthday was on a Wednesday).
By 10 o'clock I'd received a phone call from the school saying she was laying in the infirmary, having thrown up. Of course. So, I picked her up and she spent the rest of the morning laying on the couch at our friend's place while I took her brother to the paediatrician.

She spent the rest of the day at home, napping a little, but mostly being okay and feeling a little sad. We made pizza for supper. 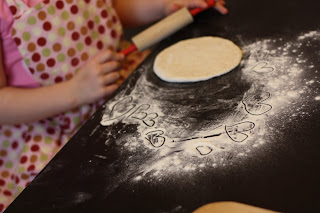 The teacher saved the cupcakes until Friday (3 day old cupcakes...mmmm) and she got to celebrate with her class then.

Then we had her home party on Sunday. It was her request. And it worked out rather well because she invited her grandparents and as it turned out, my mom could make it on Sunday. She requested a Barbie cake. I looked for a picture of barbie that was mostly face, so she could have nice big eyes so she wouldn't look scary and ugly in buttercream, but alas, there were no such pictures to be found in Internet land. When Zoe announced Barbie was beautiful, that's when I knew to stop fussing with her eyes and just let it go. My cake decorating mantra: "You are working in a medium that is meant to be eaten." 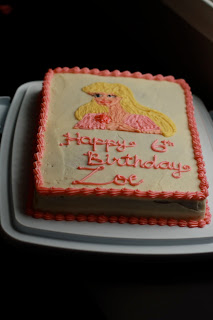 She is kind of ugly though.
crafty goodness shared by Teddi Taylor at 9:31 AM

Email ThisBlogThis!Share to TwitterShare to FacebookShare to Pinterest
Labels: baking, birthday, buttercream decoration, cakes, clothes, cupcakes, I made this