My kids made supper 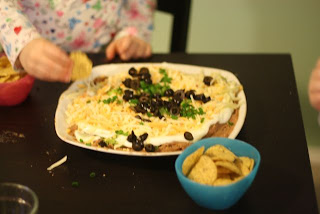 [Insert your name] is a participant in the Amazon Services LLC Associates Program, an affiliate advertising program designed to provide a means for sites to earn advertising fees by advertising and linking to [insert the applicable site name (amazon.com or endless.comSearch Amazon.com for veggie tales dvd

Both of my children are into Veggie Tales

right now. We have been borrowing DVDs from the library like they're going out of style. On one of the DVDs' special features, there is a recipe for Bean Dip and they show kids making it, so naturally, Z wanted to make bean dip. Although I was pretty sure she wasn't going to like bean dip, I thought it would be a good way to introduce her to a new food. She's not very adventurous with her food anymore. I blame the dayhome we had her in for 9 months when we first moved to the city and both my husband and I worked full time. They spoiled her refined palate with Yo-tubes, store-bought chicken nuggets, french fries & McD's. It could have been she was there from about 17 months until 27 months and it's a finicky time in a little one's life anyway, but I prefer layin the blame on someone else, instead of my dear sweet Z. She's still a fabulous veggie-eater, so I don't have much to complain about. 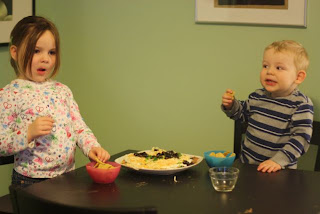 So we made this bean dip. Here is the recipe, roughly, because it is just what I can remember from watching the DVD special feature. 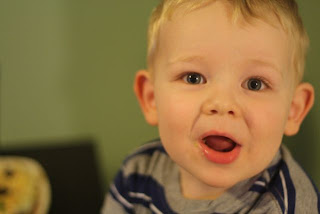 Except, you should probably chew with your mouth closed.
The kids actually did most of this themselves, since they saw kids on the DVD doing the work, too. I prepped everything and they spread it out on the plate. I cleaned up the edges a bit. They did a great job and actually ate a bit of it.
crafty goodness shared by Teddi Taylor at 1:52 PM

Email ThisBlogThis!Share to TwitterShare to FacebookShare to Pinterest
Labels: recipes