I don't quilt. Not really as a rule, I just... don't. Nothing against it really. Mostly I haven't found anything so compelling that I'd want to do that. I imagine it taking a really long time and it probably being sub-standard from what I'd be able to buy. Maybe kind of philosophically I have a little problem with it... like I think it used to be done to make use of scraps of material and make something useful out of almost nothing. Very utilitarian and thrifty, right? Now you can buy quilting cotton for like $15 a metre and then cut it up and put it back together differently... and well, I guess I just don't have a great appreciation for that. Now it's a luxury. I'm not really sure why that bothers me, I just thought of it one day and it bothered me. On top of not having much of an aesthetic appreciation for the craft, that part bugged me.

But then I saw this quilt, which I thought was so neat. Because I could see my kids loving this. So, if anything was going to get me to quilt, it would be this. Found on Ohdeedoh. 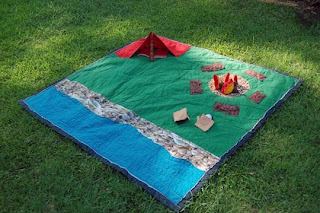 This even looks doable to me. Not a lot of piece work. Maybe even machine quilted.

There's one other quilt that really intrigued me. Since I could never afford to buy one, I'd probably make one (still the likelihood of that happening is small). But I thought this was cool. And like I said, I don't usually have an appreciation for quilts. Also featured on Ohdeedoh, though I saw it somewhere else a couple months ago. 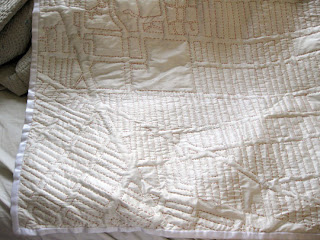 That's a map. I could totally see doing one like that of my neighborhood. I think that would be so neat.

Email ThisBlogThis!Share to TwitterShare to FacebookShare to Pinterest
Labels: cool quilts, things I didn't expect to like