So there were some more birthdays and other cake-worthy events in the last 10 months, too. I guess I didn't make cakes for all of them, but I made some cakes. I may have said this before, but I make cakes for the kids of our good friends and co-church planters. This Star Wars Lego cake was requested for the January birthday. (Star Wars Lego cake? Nothin' like a simple cake, eh? Boys....) 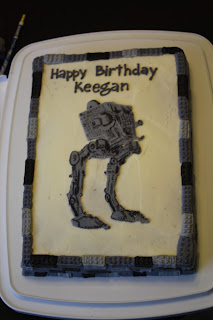 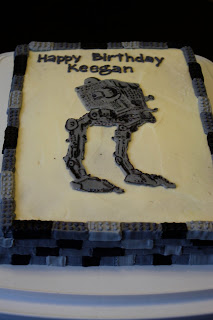 For the sides, I just piped flat monochromatic lego-sized stripes and piped dots on the top of them for the Lego look. I saw this idea here. From what I can remember, it was a hit. I was in my first couple weeks of our diet & exercise program, so I passed on the cake and ate a protein bar instead. I was told it tasted good. 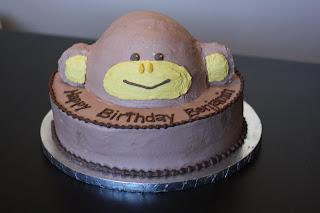 The sister of a friend of mine commissioned me to make this monkey cake for her son's first birthday. It turned out okay. She looked through my Facebook cakes album and found the picture of Zoe's 2nd birthday cake, which I didn't think was one of my better cakes, but oh well, that's what she picked.

I'm always so nervous doing commissioned cakes. People tell me my cakes look professional, but I'm not so sure. I can tell the difference when I look through professional cake albums vs. my own. I'm not down in the dumps about this or searching for compliments, I'm just telling it like it is. I make nice cakes. Some are better than others. Most are better than these and I never make spelling mistakes, though occasionally I make a blunder and end up with a cake that unintentionally looks like boobs. 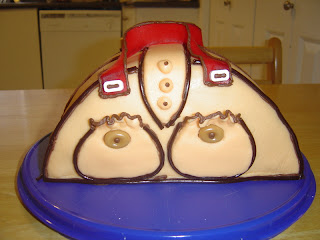 (It's supposed to be a purse, but it is kinda pathetic, even if it didn't look like boobs.)

Then there was a wedding. I wasn't really supposed to make a cake for this wedding. I'd thought of offering in advance, but the wedding date was only a few weeks after my due date, so I wasn't sure I would be feeling up to making a cake. But then we were visiting with the couple and while I know they're not big cake people (she's celiac & he doesn't really really care for cake), one of the reasons they opted for no cake was because it was expensive for something they didn't really care for. But everyone's grandma wants them to have a cake, if only for the opportunity to take pictures of them cutting it. 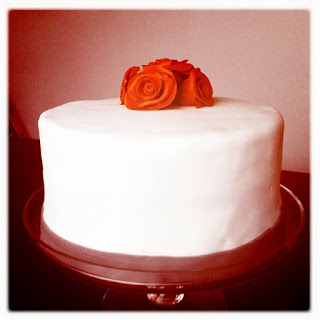 So, this was my first attempt at a gluten-free cake. I used this recipe and the bride told me it was delicious. I'll have to try it sometime. I didn't have leftover cake for me to try, so I was really hoping it was yummy. 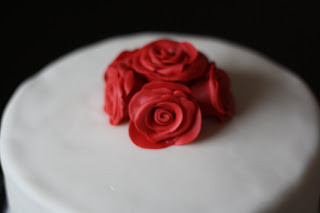 For the roses, I made them out of fondant using this technique found on YouTube. Seriously people, I don't know how to do anything. I just Google it and figure it out. The beauty of the Internet is that everyone wants to be an expert so there are free instructions out there for just about everything. LOVE! I was pretty happy with this cake, though the seams were kind of obvious, but not if you take pictures from the right side!

Now, the final cake I haven't shared yet. Simon turned three the day after I began my 10 month blog hiatus. This was his cake. He loves basketball. I was pretty pleased with the basketball colour I achieved for the fondant. Not always easy to get exactly what you're looking for. I used a bowl to make the shape and then used a lot of icing to make it more ball shaped and less bowl shaped underneath the fondant. It's round enough. 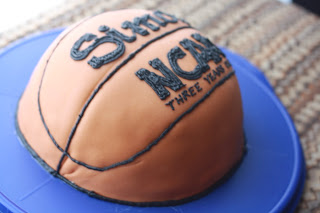 If you had a birthday in the last 10 months, Happy Birthday. If you have one coming up in the next 10 months and need a cake, let me know and we'll work something out.
crafty goodness shared by Teddi Taylor at 1:45 PM